Electric Toyota Tundra launch held back by lack of infrastructure

Jump to Latest
EatSleepTundras
The Tundra EV won't happen until Toyota sorts out its infrastructure issues. 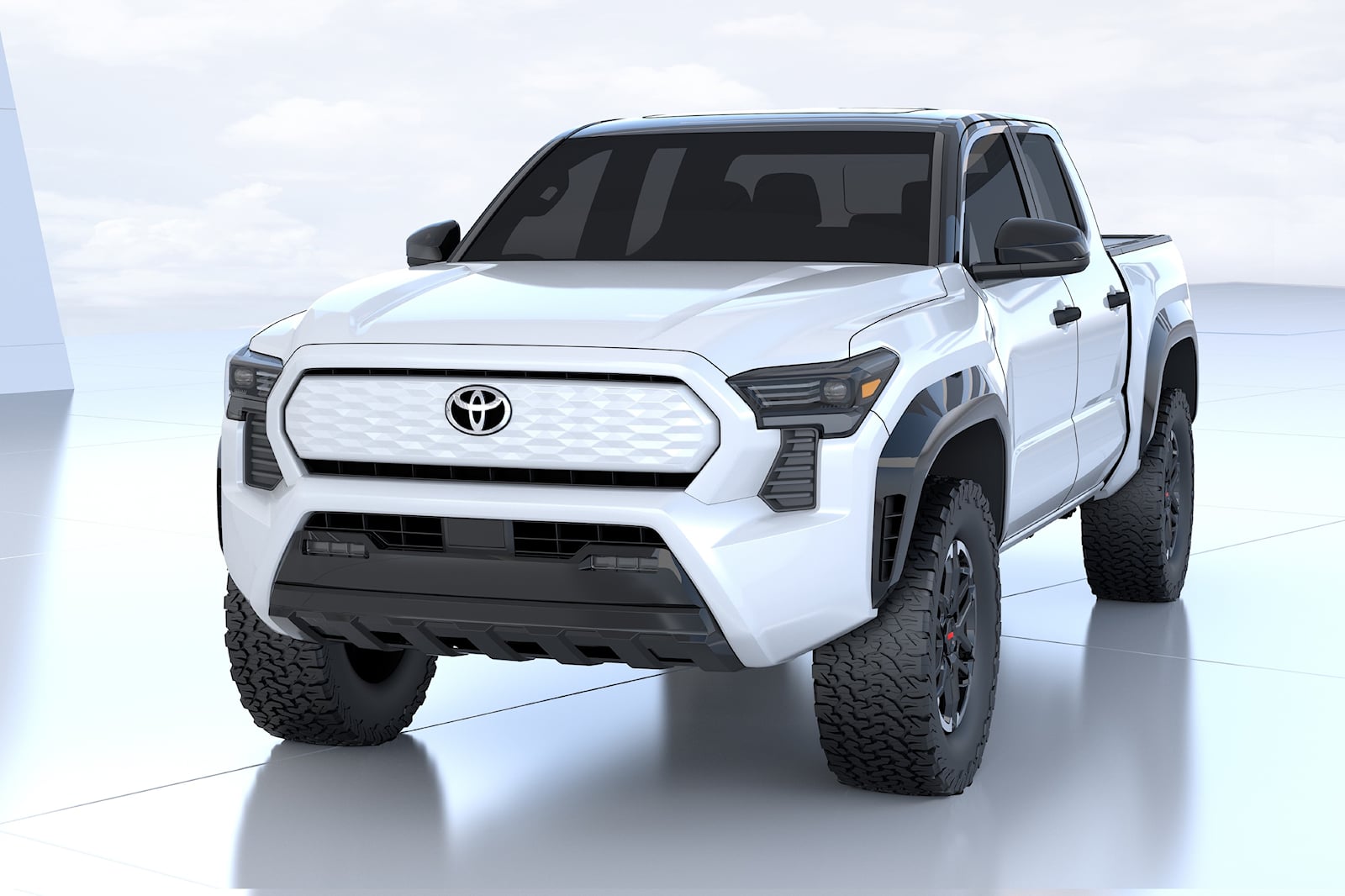 If you've been holding out for a Toyota Tacoma EV or Tundra EV, you may be in for a long wait.

The automaker still sees a lot of problems with diving headlong into electrification.

If you've been holding out for a Toyota Tacoma EV or Tundra EV, you may be in for a long wait.

We spoke with Mike Sweers, executive chief engineer for the Toyota Tundra, Sequoia, Tacoma, and 4Runner vehicle programs at Toyota Motor North America, and asked whether Toyota has any desire to follow Ford and Chevrolet into the full-size electric pickup truck segment.

The short answer is that Toyota doesn't want to dive head first into the segment if it can't do the truck justice.

The long answer is a bit more complex than that, and after discussing everything from the next-gen Tacoma to how the brand sees the 4Runner taking the fight to the Ford Bronco, we discovered that the future of Toyota's approach to electrification is a fascinating one.

A Varied Approach To Electrification
While Sweers admits he can't confirm future products, he did talk about the 15 electric Toyota concepts that we saw in 2021, one of which was an electric pickup that looked similar in size to the current Tacoma. "Akio Toyoda mentioned in that roll-out [of the concepts] that the entire Toyota fleet will be electrified in the next five years," Sweers tells us.

That's an important distinction to make, as with all the fanfare and rushed legislation changes forcing a shift to electrification, it seems some manufacturers have been quick to dismiss the needs of the customers who buy and use these vehicles. By retaining a variety of options and powertrain solutions, Toyota should be able to make the necessary shifts as each sector requires them.

EVs Aren’t Ready For Truck Buyers Yet
Sweers admits there are several hurdles to widespread EV adoption for OEMs. "As we look to the future, the biggest hurdle we have is infrastructure." Speaking of a recent benchmarking drive where Toyota engineers drove a Hummer EV, a Ford F-150 Lightning, and an unnamed Tesla model - it wasn't a Cybertruck - Sweers says they wanted to evaluate the performance of these BEVs.

"A battery electric vehicle's motor generator is like an on/off switch, so it's fun at first. But can you tow with it? And how far can you tow between recharges? And can you find a recharging station? Can you haul with it?"

These are all valid trains of thought, and he summarizes them all with one question: "Can you do what a truck customer's requests are [with an EV]?"

Toyota's current crop of pickup and truck-based SUV drivers are an adventurous sort, the type that will take their vehicles to the Moab for a spate of off-roading. In that situation, "there's going to be range anxiety on that vehicle," says Sweers.

With a gasoline or diesel pickup truck - Sweers tells us he owns a diesel Land Cruiser 70 he brought back from Japan and a new Tundra - you can carry an extra 10 gallons of fuel, so if you get stuck somewhere, you have a reserve to get you somewhere you can fill up properly. But with an EV, "what do you do? When you run out of batteries, it's not like you pull out the pack of AAs and switch batteries out and continue moving on.

"There are all these types of questions that I think need to be answered that are different than the urban-setting BEV that you're running back and forth to work and you plug in at your house at night."

That's the big differentiator between regular EVs and electric trucks for Sweers and his team.

"I try never to knock my competition's products, they have some cool offerings in their BEV trucks. The only question is, 'Am I willing to use it in the way it was designed?'"

Toyota Won’t Build A Product That Fails Customer Expectations
First and foremost for Sweers and Toyota when the question of an electric pickup comes up is, "Is it meeting what that truck customer's demands are?"

Getting to the point of future powertrain offerings - something we touched on in our discussions about the choice to go turbocharged and hybrid on the Tundra - Sweers says it's all about customer demand, customer needs, and customer satisfaction. "I can offer them a lot of things, I have a lot in our portfolio that I could throw in our vehicles and do some cool stuff. But if a customer buys it, and they're disappointed with the range, or the power offering, [it's bad news]."

EVs and hybrids are typically purchased by people who care for fuel economy, but Sweers says most full-size truck buyers don't prioritize this. "They'll put up with less gas mileage, but they won't put up with less power than they were expecting or less capability than they were expecting." Sweers says that "as a chief engineer, that's my job: are we exceeding the customer's expectations, whether it's quality, durability, reliability, fuel economy, or cost of ownership?"

What Needs To Change?
So what needs to change? What hurdles need to be overcome by the automotive industry at large to make a full-size EV viable enough for Toyota to pursue an all-electric Tundra?

Sweers has one word for us: infrastructure.

"Right now, we have the wild west out there," Sweers says, saying that until the aforementioned benchmarking test, he didn't understand the full extent of it. "Tesla's gone its own way, and it's great until you have to charge your Tesla at a different supplier," highlights Sweers.

This sort of experience is not unlike what CarBuzz test drivers have experienced on multiple occasions. It highlights the fact that if we're to change to an electric society, we need to standardize the infrastructure. Gas stations don't all have different pump nozzles, so why are EV charging stations all so different from one another?

There's another issue with the current infrastructure, and that's safety. "Part of the problem with BEVs and PHEVs is that the safety system for charging is put on the OEM, not on the power supplier," says Sweers, whereas "whether it's gasoline or diesel, the safety requirements for refueling are set on the fuel supplier.

"OEMs bear the brunt of trying to bridge all these different charging solutions with the safety, overload, and heat safety requirements in their vehicle." He doesn't mention it by name but says that there was "one company out there that had a problem with overheating at the connector, and they're burning vehicles up, and they're burning the connectors on the vehicle, and that's an expensive repair on the vehicle side."

Sweers firmly believes that the energy providers need to take more responsibility for their own infrastructure and that they need to work together to standardize infrastructure before EVs can become widely used.

· Registered
Joined Oct 15, 2021
·
190 Posts
I'm sure that's part of the reasoning for holding off on an electric Tundra. But I think it also has to do with the fact that Toyota's roll out of their first EV, the bZ4X has been a mess.

Toyota Has Fix for bZ4X EV Wheel Problem, Will Replace Wheels and Bolts

Because of problematic wheels that could fall off, Toyota recalled 258 units of the new model in June. Several hundred Subaru Solterra EVs that hadn't gone out to buyers yet were also involved.

Toyota has sent a letter to bZ4X owners, offering a choice between a loaner and incentive package or full repurchase...